One important thing to know is that Build Services is intended to make packaging projects easier. We are not aiming to become a full CI server like TeamCity of Team Foundation Server. That said, we do believe Build Services is appropriate for many scenarios and can take a lot of work out of your hands. We found some blog posts you may like: Nico Vermeir is using Build Services to package Windows Phone libraries. We also use it ourselves to push components from GitHub to NuGet.org.

When creating or modifying a build source, you can now specify the configuration and platform that should be built. Easily switch between Release (the default configuration) or Debug or any other configuration that exists in your solution. The same goes for platform: if you wish to specifically build for x86, this can now be specified as the target platform. 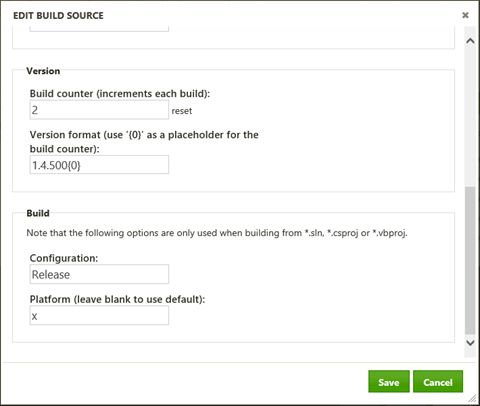 Note that we also set a %Configuration% and %Platform% environment variable during the build process. This way you can make use of these in your customized builds that are run using a build.bat file.

In earlier versions of MyGet Build Services, we’ve been generating a random incremental version number for packages created during build. From now on, we have support for true incremental build numbers through the build source settings 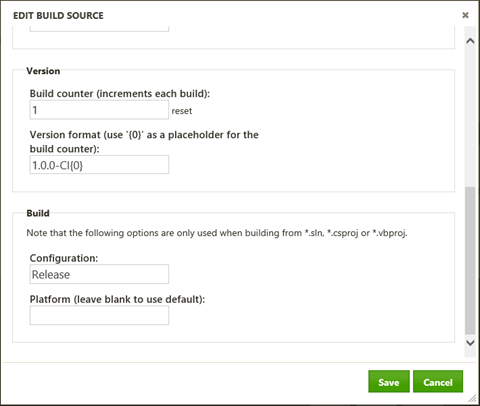 The build counter starts with zero and increments with 1 on every build. You can also specify a version format ( Iuse '{0}' as a placeholder for the build counter) which will be generated during build. Note that if you enable the forbid packages which are non-compliant with Semantic Version option ,you should make sure the version format specified follows the Semantic Version rules.

We also set a %BuildCounter% and %PackageVersion% environment variable during the build process. This way you can make use of these in your customized builds that are run using a build.bat file.

We’ve added support for psake builds (use a built.bat file and invoke psake). Building Windows Phone 8 packages is now also supported out of the box. This brings us to the following list of supported frameworks and SDK’s:

Regarding test runners, we now support

We believe adding these SDK’s out-of-the-box provides a lot of value to our users and we want to continue investing in expanding the number of supported SDK’s.

As part of the build process, we now set the following environment variables. Note that these are all read-only.

Some smaller features have been implemented for version 1.6 as well. 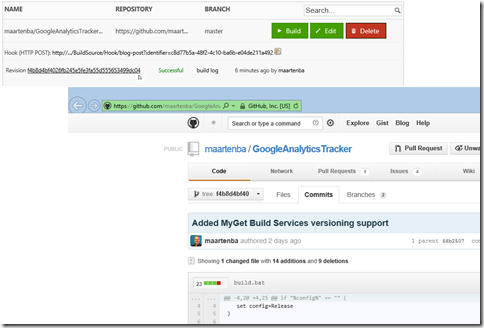