A few weeks back, NuGet 3.0 was released. It’s a redesign of the NuGet client targeted at Visual Studio 2015, with a number of improvements and changes from earlier versions of NuGet. One of the changes the NuGet team made was on the server side, with a new protocol. We’re happy to announce that MyGet now has preview support for this new protocol as well!

The new NuGet server-side API was first written about in April 2014. And even before that, there was a talk Evolution of NuGet at MonkeySpace 2013. In it, the NuGet team describes what the NuGet team envisioned: a faster and more reliable API for .NET developers to consume packages. When opening the NuGet Package Manager Dialog in Visual Studio 2015 this becomes very visible: the well-known OData V2 feeds feel slow. MyGet now supports the NuGet V3 protocol (in preview), sharing the vision the NuGet team laid out over 2 years ago and made happen a few weeks ago: make NuGet package management faster.

Note: make sure to read the entire blog post when using private feeds - the NuGet client that ships with Visual Studio 2015 NuGet only supports pre-authenticated V3 feeds. An update is available with full private feed support.

How to make use of the NuGet V3 protocol with MyGet?

The URL of a MyGet feed typically looks like this: https://www.myget.org/F/feedname/api/v2. For the V3 protocol, this URL becomes https://www.myget.org/F/feedname/api/v3/index.json. This feed can be registered in Visual Studio 2015. From the Tools | NuGet Package Manager | Package Manager Settings menu, we can select the Package Sources tab and add a V3 feed in the same way as a V2 feed can be added. We can give the feed a descriptive name, and enter its URL. 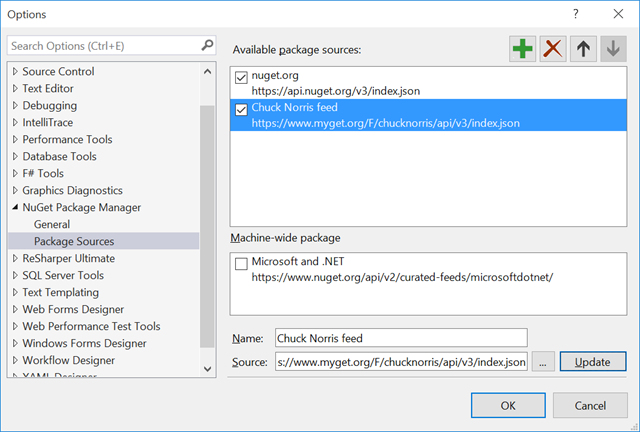 Once added, we can manage packages for our project or solution, and select the newly added feed from the dropdown. 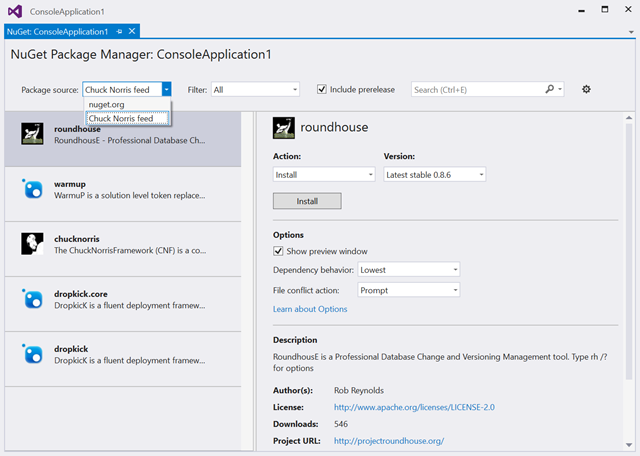 Does this also work with private (authenticated) feeds?

It’s perfectly possible to consume private (authenticated) feeds on MyGet using the new NuGet client in Visual Studio 2015. Unfortunately there is a bug in the client that makes this a little hard: if it has to prompt for credentials, consuming the feed will fail. The NuGet team confirmed a fix is ready to be released (in fact, an RC version is out), but in the meanwhile a pre-authenticated feed URL can be used to consume a private V3 feed.

A pre-authenticated feed comes in the following format: https://www.myget.org/F/feedname/auth/accesstoken/api/v3/index.json, where the feedname is of course the name of the feed, and accesstoken is one of the access tokens that can be managed via the MyGet website.

Can upstream feeds be proxied?

The MyGet V3 feeds support proxying upstream V2 feeds (not V3 yet). This allows for registering one V3 feed URL in Visual Studio while proxying one or more external (V2) feeds over the same URL. This greatly speeds up working with NuGet! Have a look at our documentation to learn more about feed proxying.

When browsing MyGet, you may notice the V3 feed URL is not being advertised anywhere. The reason for that is twofold: we’re offering the V3 protocol as a preview. We want to make sure the feed behaves the way it should. Second, we want to continue improving V3 protocol support, for example by enhancing support for proxying upstream feeds with upstream V3 sources.

We would love to hear your feedback via @MyGetTeam or through the comments below.