Upstream sources play a key role in a professional approach towards Package Management. MyGet gives you the option to specify one or more upstream sources for a package feed. Even though this feature has been available on MyGet for years now, we feel it upstream sources deserve a place in the spotlight once: they enable various scenarios that are impossible on any other package management service, and above all: they are a huge facilitator for a smooth and automated development workflow (and thus developer happiness :-)).

Why use upstream sources?

If you are confused about the usage of "upstream" and "downstream" in the context of package sources, we've got a little poetic explanation for you, which may already help you visualize the relationship between package consumers, your MyGet feeds, and your feed's upstream sources.

By default, MyGet feeds have the public, central repositories configured for each package type. This includes:

To configure an additional upstream source for your MyGet feed, navigate to Feed Settings > Upstream Sources. Then click Add Upstream Source and select the package source type you want to add.

A dialog will prompt your for upstream source information and will also expose a few common presets for you to take advantage of. Did you know we even support Dropbox?!

If you have any access privileges to other MyGet feeds, you will see those in the MyGet Feeds presets, so you can easily build a chain of package sources to facilitate a package promotion flow. 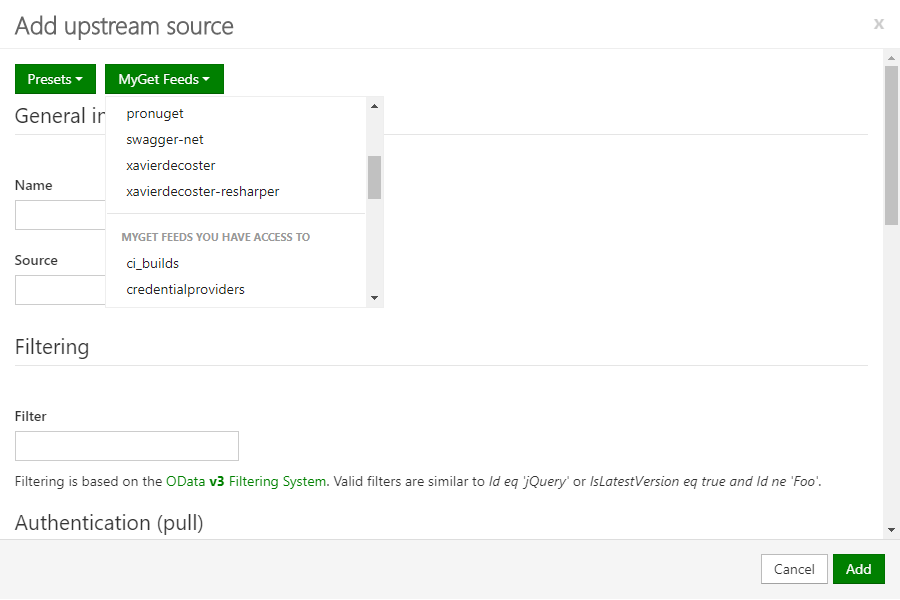 If you select a private MyGet feed you have access to as an upstream source, there's no need to provide credentials to be able to restore packages from it on MyGet Build Services. MyGet will impersonate your user account when authenticating against that upstream source.

For any non-MyGet upstream source that requires authentication to pull packages, you'll have to provide username and password to be used during Basic Authentication.

Warning! Be very careful with password managers and browser add-ons providing auto-completion of credentials!
We recommend disabling these credential managers on the MyGet web site to avoid issues when editing upstream sources. Oftentimes, these tools auto-complete the credentials fields with out-dated credentials (even when editing different settings in the dialog).
When running into package restore failures on MyGet Build Services, or when noticing that upstream packages are no longer available downstream, this is the most common source of the issue.

In the opposite direction, in order to push packages from your downstream MyGet feed to the upstream source, you may need to configure a (scoped) API key or access token.

When the upstream source is a v2 NuGet feed, you may configure additional OData filtering. Filtering is based on the OData v3 Filtering System. Valid filters are similar to Id eq 'jQuery' or IsLatestVersion eq true and Id ne 'Foo'.

Warning! This capability may go away at some point in favor of newer NuGet v3 APIs.
We currently still keep the feature around for some scenarios that are not yet fully supported on NuGet v3.

Adding a package from an upstream source

Adding a package from an upstream source can happen in three ways: manually, by reference (proxying), or by value (mirroring).

Select From Feed in the dialog that prompts. 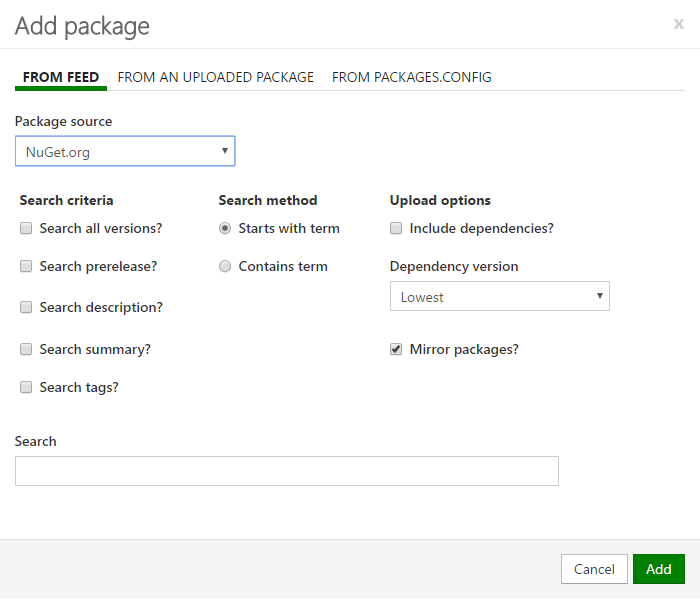 Configuring upstream sources on your MyGet feed unlocks quite a few integration scenarios and automation opportunities! 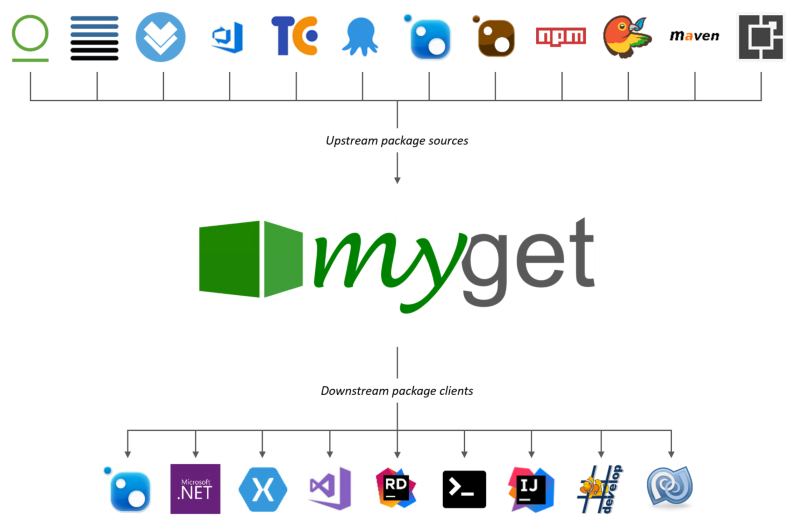 Proxy packages from an upstream source

Warning! Avoid configuring multiple package source proxies on a single feed, or in a chain of feeds, as this will magnify the disadvantages, and result in very slow feed response times.

The following diagram illustrates the effects of upstream source proxying. 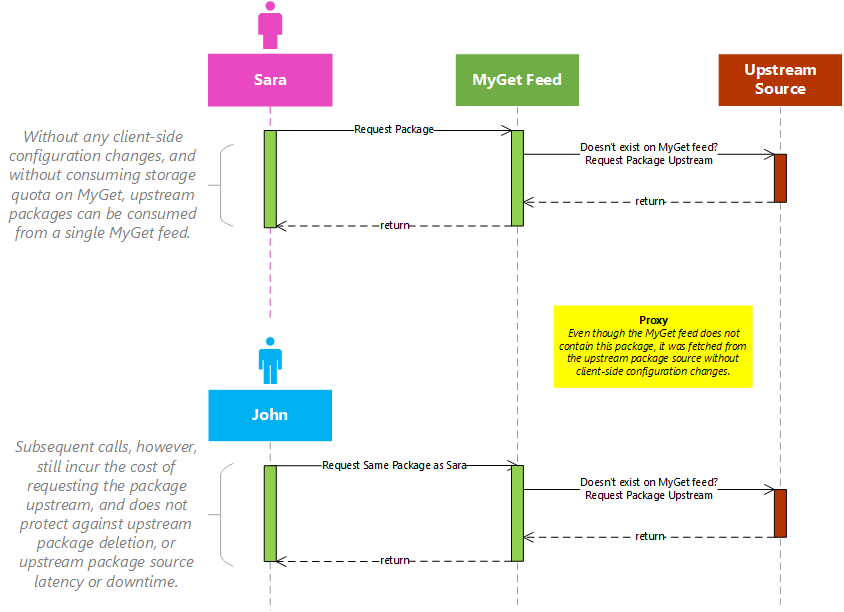 To enable upstream source proxying, you must tick the check-mark next to Make all upstream packages available in clients.

Mirror packages from an upstream source

You can configure an upstream source to mirror upstream packages onto your MyGet feed. This configuration is similar to package proxying, but takes it one step further.

Whenever someone requests a particular package from your MyGet feed for the first time, MyGet will query the upstream source and copy the package onto the MyGet feed.

The following diagram illustrates the effects of upstream source mirroring. 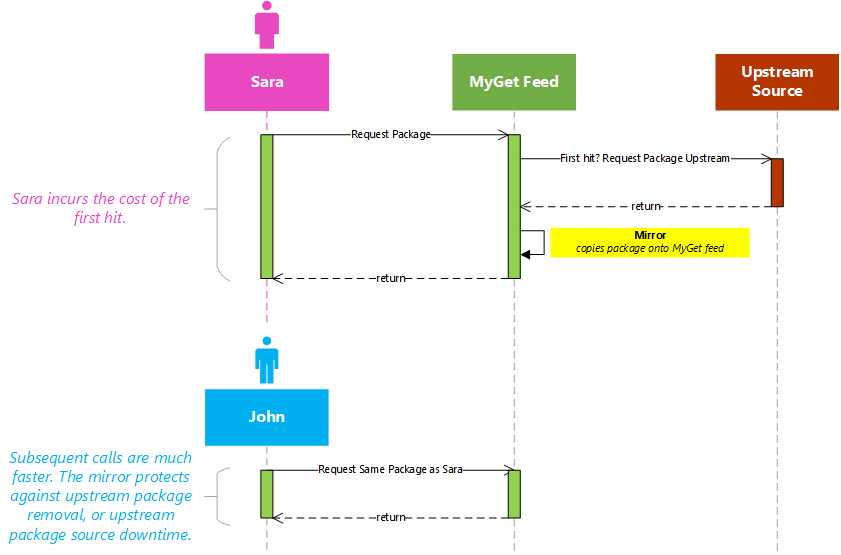 To enable upstream source mirroring, you must tick the check-mark next to Automatically add downloaded upstream packages to the current feed (mirror).

Optionally, you can also tick the third check-mark to indicate that any package found upstream is to be considered a package dependency (and should not be consumed directly). This will hide those packages from search results, whilst still allowing you to restore them.

Once upstream source mirroring is enabled, we can consume our MyGet feed from Visual Studio which will also list upstream packages. For example, the example acmecompany feed only lists one package:

When searching in Visual Studio, we do see packages that originate from upstream sources: 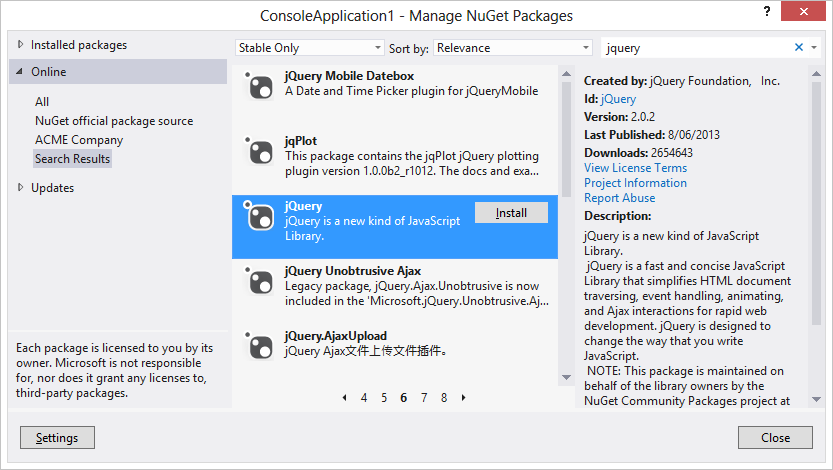 After installing this package, our feed now automatically contains a copy of the jQuery package:

From now on, the package is available from our MyGet feed directly, without having to explicitly add it manually from the upstream source.

Using a MyGet feed as a staging area (before pushing upstream)

Many development teams are using some kind of package promotion workflow: pushing a package from one feed to another based on quality gates, target audience, or any other criteria. This is very typical scenario for which upstream sources are essential.

Of course, all of this can happen in an automated fashion using package manager client. However, as promoting a package typically involves some kind of human intervention (e.g. release manager approval), we've also made it a first-class feature in the MyGet web site.

Simply pick the package version you want to promote from the package details page, and hit the Push button to initiate the package promotion flow.

A dialog will provide you with additional options. MyGet is also smart enough to detect any package dependencies you might want to push along in one go as part of this package promotion flow. 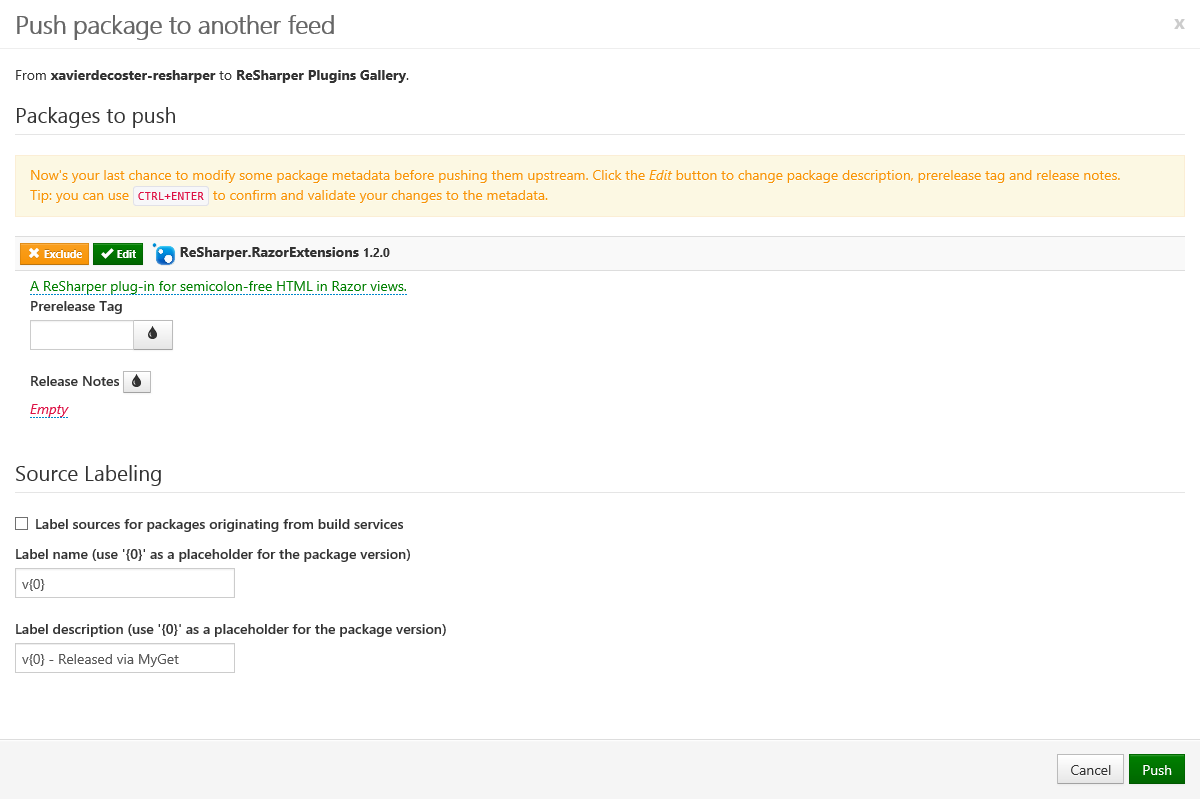 At this point, you can still make a few metadata changes before pushing upstream. This dialog allows you to: 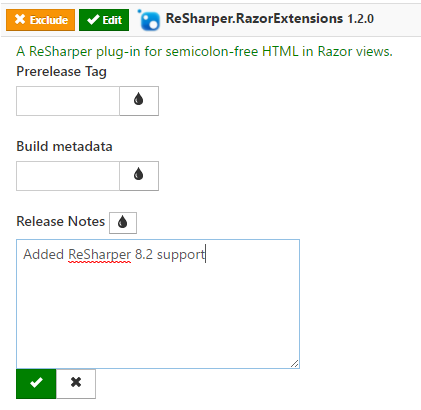 Upstream sources for a feed are also available during build. This can be useful in the following scenarios:

Applies to: npm
We strongly suggest to proxy registry.npmjs.org to be able to run `npm install` during build, as npm will default to the MyGet feed as the default registry.

The NuGet.config file on our build agents is configured using NuGet's defaults, enriched with all NuGet upstream sources configured for your MyGet feed. Based on these defaults, the following conventions are active:

Both of these conventions can be overridden by editing the build source configuration.

MyGet feeds can automatically fetch package updates made available through the upstream sources.

When adding or editing a upstream source, we can enable this behaviour per package source, as well as an interval when MyGet should check for updates. 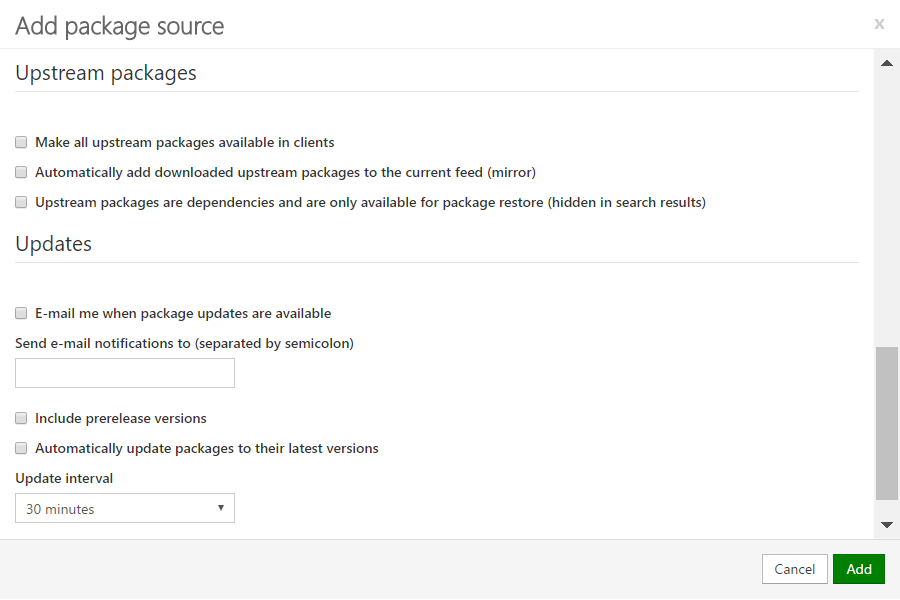 The following options are available:

As you can see, MyGet's support for upstream package sources unlocks a wide range of package management scenarios that may help you streamline your development flow and package governance even more. If you haven't tried the above scenarios yet, do give them a try and experience how it may make your life easier.
Oh, and we do support pushing your private symbols packages upstream along with your NuGet packages, too!
Happy Packaging!
PS: Please take 10 seconds of your precious time to tell us how we're doing!